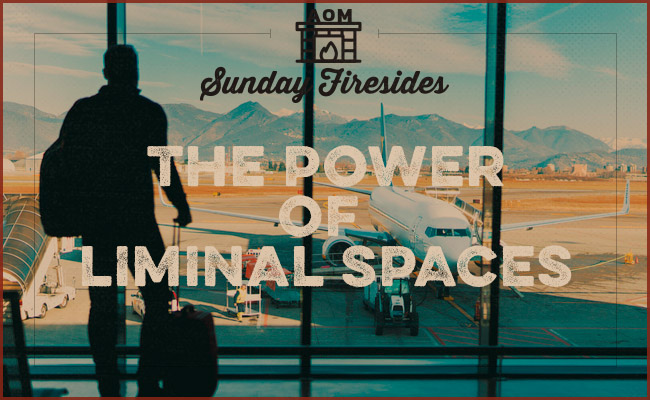 The summer travel season is upon us, and many people are looking forward to spending time in desired destinations. Yet there’s also something special, but easily missed, in the process of getting there — the flights, the road trips, even the layovers at airports.

Ralph Waldo Emerson said that we find “enlarged powers” and “poetic creativeness” not “in staying at home nor yet in traveling, but in transitions from one to the other.” He called these experiences croisements – crossings.

I like to refer to them as liminal spaces.

Liminality refers to being in between two states. It’s particularly used to describe the middle stage of a rite of passage, when you’re standing on the threshold separating an old identity from a new one.

Liminality can occur when you’re between jobs or relationships or school semesters. But as Emerson notes, it’s perhaps felt most acutely when you’re en route from one place to another.

I get a wonderful feeling of disorientating-orientation walking through an airport. But I especially love a long road trip. I love feeling that no one knows exactly where I am. That I’ve slipped the structures of my ordinary life.

Emerson said such experiences must “be adroitly managed to present as much transitional surface as possible.” To me that means riding the inherent perspective-altering qualities of liminal spaces by using them as times for maximal reflection. When I’m driving out West, I gaze through the windshield in absolute silence for hours on end. I think my best thoughts.

In day-to-day life, current circumstances seem completely set and unchangeable. During a “crossing,” you sense how very fluid and malleable they actually are. That what has been, doesn’t have to be.

Sitting at Gate 18, you can come to realize that just as your trip is in process, so is your life.

The post Sunday Firesides: The Power of Liminal Spaces appeared first on The Art of Manliness.