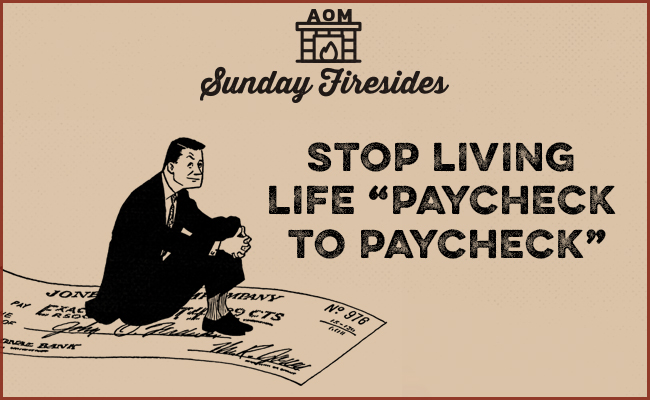 In the realm of personal finance, living “paycheck to paycheck” means that you’re able to just cover your expenses with the money you have coming in, but never save or invest beyond that.

It’s an unfortunate positon to be in financially, and it also describes well the way in which many people live life in general.

When you metaphorically live life “paycheck to paycheck,” you do just enough each week to maintain your current existence. You take care of the urgent and outstanding tasks the neglect of which would disrupt the status quo, but you never take action on things that would improve and progress your situation. You thus remain stuck wherever you are.

Changing this pattern — tackling the proverbial project of “getting one’s life together” — can seem overwhelming. But it needn’t be. All it takes is completing one single to-do — one single task that moves your life forward, even slightly — each week.

Make the doctor’s appointment; choose a workout program; turn off notifications on your phone; send the job inquiry email; order underwear; text the invitation; find a recipe; take the pants to a tailor; replace the lightbulb.

Accomplishing just one task a week may not seem like much, until you realize that at the end of the year, you’ll have moved your life forward in 52 ways. That’s far better than living “paycheck to paycheck”; not only will these small-but-consistent steps put a little something away for you in “savings,” their accumulation will also garner interest, reaping dividends as the weeks become years, and the years become decades.