Sunday Firesides: Simplicity Is Not Laziness 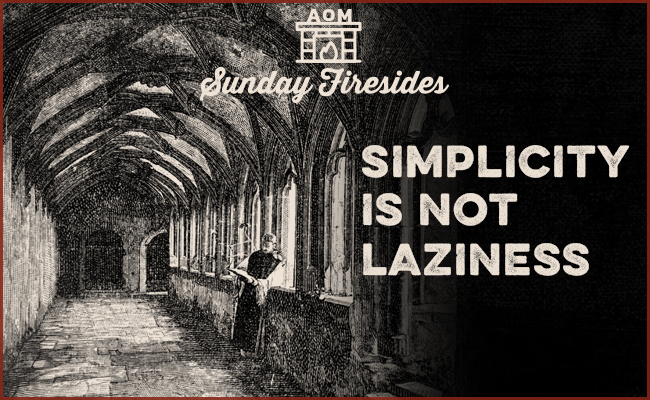 “Simplicity” is a word with an almost magical ring to it; if we could just simplify our lives, we think, it would solve many of our problems. Yet we often go about the simplification process in the wrong way.

While simplifying is largely associated with doing less, this is an impoverished definition of the idea. Monks embody simplicity, and while they do far fewer worldly things, they do far more study, worship, prayer, and so on.

What we often really do in the name of simplification, then, is to decrease activities that require effort, while increasing those that don’t. Yet this can just be a more flattering way of describing laziness — and actually conflict with our stated aim of simplicity.

If, for example, you hope to have a memorable, enchanted holiday season, and yet jettison all the traditions and activities that would create such, then your aspirations and your actions are working at cross-purposes; your life is divided and conflicted — not simple.

Real simplicity means having a purpose, and then prioritizing your life around it. That may indeed require doing less of that which detracts from your purpose, but it can also necessitate doing more of that which contributes to it. The goal is to have every element in your life work in harmony towards your aims.

By all means, ruthlessly cut out those commitments that don’t contribute to your desires, but ensure that which fills the gap does. The simple life is not a matter of sheer amounts, nor of magnitude of effort, but of wholeness and integrity.

The post Sunday Firesides: Simplicity Is Not Laziness appeared first on The Art of Manliness.