Sunday Firesides: Plans Are Useless, But . . . 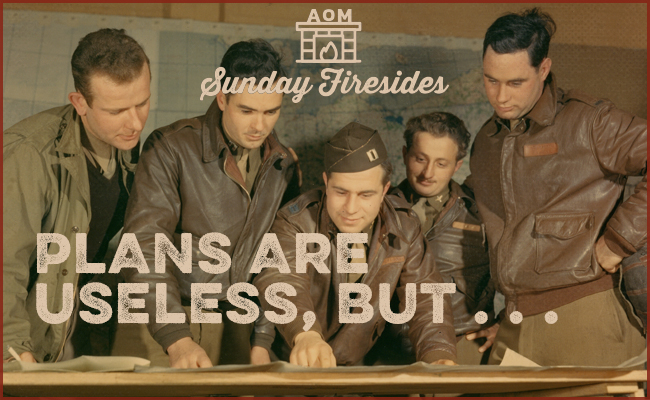 Every Sunday I plan out my upcoming week. I write down all the things I need to get done, and then plot a general scheme for which day I’ll do what.

Even though I keep my plan fairly high-level (rather than scheduled out by the hour), it still never goes the way I project. Unforeseen needs and snafus inevitably arise during the week, scrambling my intended agenda.

Given this inevitability, one might conclude that it’s pointless to even create a plan in the first place. But that couldn’t be further from the truth.

The military strategist John Boyd formulated a decision-making tool that helps one navigate the fluidity and uncertainty of war, and life. Called the OODA Loop, it runs through four phases: Observe, Orient, Decide, Act.

When you Observe, you get the lay of the land and scope out possible opportunities and pitfalls.

When you Orient, you plot a course, and then figure out if it aligns with the current, and often changing, reality you face.

If it does, you can go straight to the Act step, skipping the need to Decide altogether.

If it doesn’t, you break apart your old blueprint, to reformulate a plan that better matches what’s happening on the ground.

Because you went through the process of creating an initial plan, however, you’re better able to make this pivot and decide how to proceed; you’re not caught flat-footed. You already know the pieces you need to accomplish, even if you have to figure out a different way to achieve them.

The first person to make it through their OODA Loop wins against an “opponent” (whether literal rival or metaphorical force). How well you Observe and Orient sets your speed for the maneuvers to come.

That’s why General Dwight D. Eisenhower said: “Plans are useless . . . but planning is everything.”

The post Sunday Firesides: Plans Are Useless, But . . . appeared first on The Art of Manliness.