How to Harvest and Use Nature’s Aspirin

Home > Uncategorized > How to Harvest and Use Nature’s Aspirin 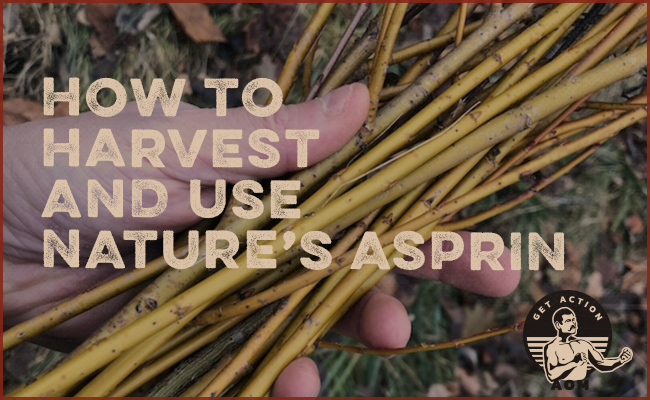 Editor’s Note: This is a guest post from wilderness survival expert and instructor Creek Stewart.

When I was a boy, my grandfather in Kentucky taught me how to harvest my own natural pain medicine. It all started with a headache and a long walk down the hill in front of his house to the edge of a pond where a large, showy white willow (Salix alba) grew. Using his pocketknife, he carved away a few slivers of smooth bark from one of the new growth branches. He popped them in his mouth to “simmer for a while,” as he called it, and gave me a small piece to sample. It was incredibly bitter and tasted like . . . medicine.

Though I used willow bark as a pain reliever many times after that, it wasn’t until over 15 years later that I would really begin to study and experiment with it. If you like the idea of knowing how to attain a pain reliever in a survival situation, or of harvesting medicine from your own backyard or nearby greenspace, then you’ll appreciate the following information about how to use willow bark as Mother Nature’s aspirin.

Getting to Know the Willow Tree 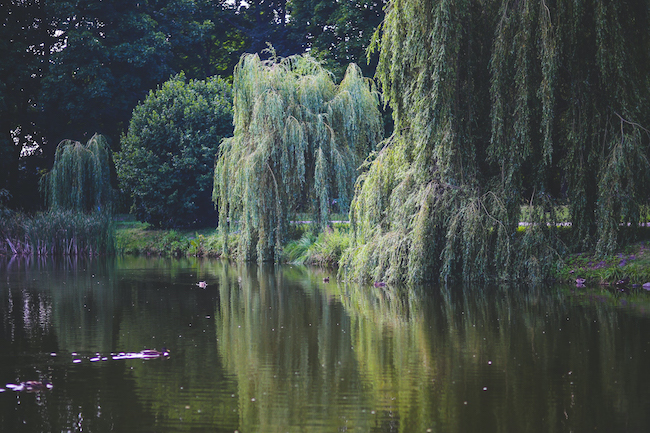 There are hundreds of species of willow throughout the world. They belong to the genus Salix, and are simply called that in many areas. They love water and grow in nearly all temperate regions of the world where water is available. I’ve seen them along the banks of arroyos in the Sonoran Desert and in the marshy swamps of Maine. They grow in nearly every roadside ditch, along rivers, and at the edges of ponds. If you cut a live willow twig (called a cutting) off the tree and shove it in the ground, it will likely root and grow into a tree of its own. I’ve planted hundreds of willow trees on my own property using this method, and I’ve put all that willow to good use, using it not only for medicine, which I’ll discuss, but also in my survival training classes for making baskets, natural fiber cordage, bow and arrow, fish spears, bow drill kits, and various traps, including the funnel fish trap. 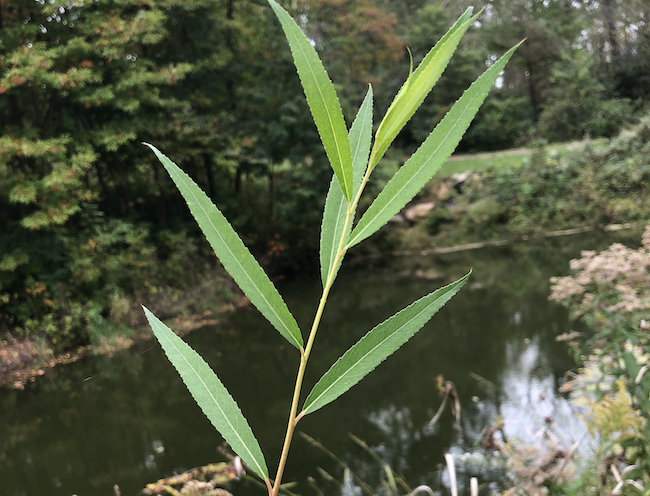 Willow leaves are typically long and narrow. They are widest in the middle and taper to a point on both ends. 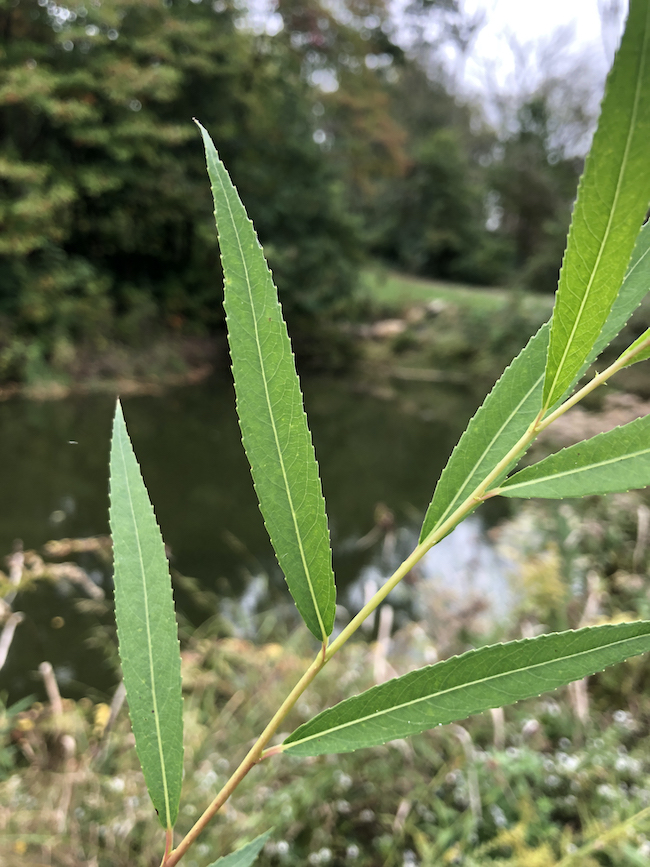 The leaf margins are finely toothed. The upper-side of the leaf is bright green, and the underside is often pale green, which gives many willows (such as the white willow, Salix alba) a silvery appearance from a distance. 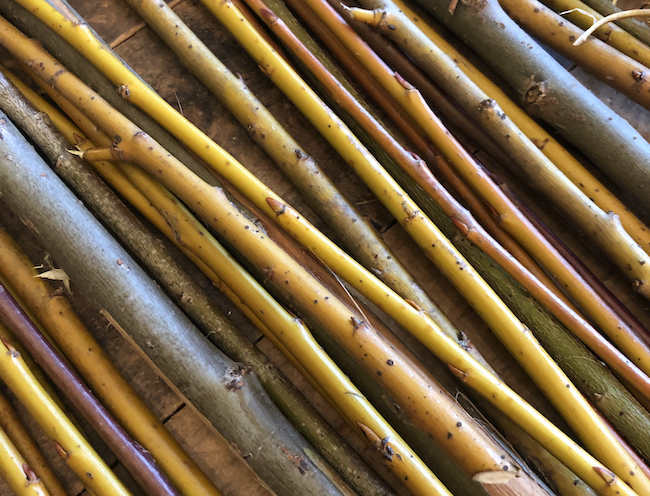 An array of bark colors on these young willow cuttings.

The bark of young trees and branches is very smooth and becomes darker and furrowed with age. Many varieties of willow, especially those related to Salix alba have brightly colored bark in early spring that can range from yellow to red.

The Medicinal Properties of Willow

A medicinal record of using willow bark for pain relief exists in almost every archival text that discusses medicine and herbal remedies. Even Hippocrates wrote of it. It was also commonly used among Native Americans and many other indigenous cultures all over the world.

In fact, willow bark was so effective for pain relief that early pioneers of modern medicine sought to create a synthesized version in a laboratory. The result, called acetylsalicylic acid, was discovered by chemist Charles Frederic Gerhardt in 1853. In 1899, the German pharmaceutical company BAYER named it aspirin.

How to Harvest Willow Bark for Medicine

Disclaimer: I am not a doctor and you should consider consulting your family practitioner before using willow bark as a medicine. One thing is for sure, if you are allergic to aspirin or any other salicylates, then you’ll likely have a reaction to willow bark. You should heed pretty much any warning on the back of an aspirin bottle before consuming willow bark.

Medicinal willow bark in the form of capsules or extract is sold at most natural food/medicine stores and online. But you can also harvest your own from nature.

While the white willow (Salix alba) and black willow (Salix nigra) seem to be the most common species used for the commercial production of willow bark medicine, I have used the bark from countless other species of willow, while in the field, with equal effect. The one I’ve used most often is weeping willow, which is a cultivar of white willow, and readily available in my area. 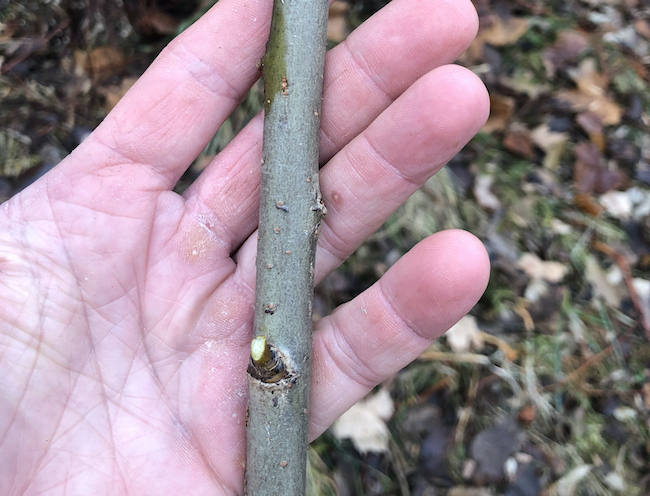 A willow tree has three layers to recognize: 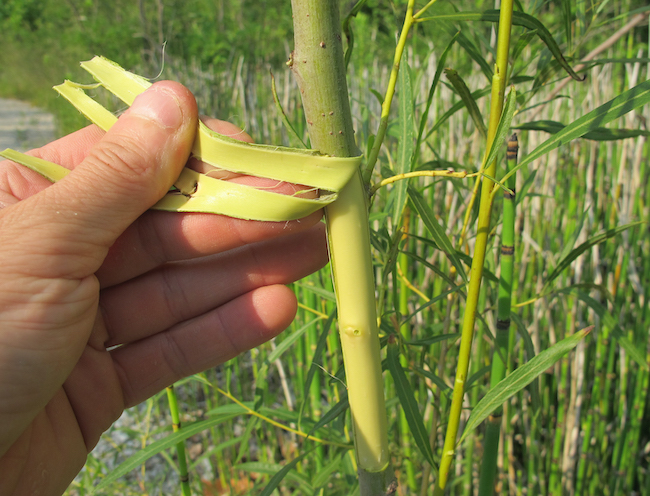 Easily peeling away the inner (and outer) bark of a willow sapling in early spring.

You can harvest willow bark during any time of year, but it’s ideal to do it in the spring, for two reasons. The first is that in springtime, the inner bark is flush with sap and fluids, making the bark easy to peel from the branch or small tree. In central Indiana where I live, willow bark can be stripped with ease from April to early July.

Secondly, research indicates that the concentration of salicin in willow bark is highest in spring; rising to as much as 12.5% as compared to .08% in the fall. 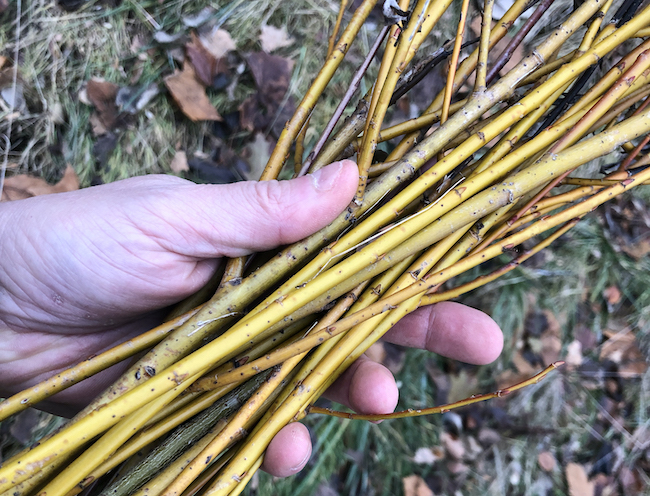 For an ethical harvest, it’s always best to cut from new growth shoots or branches. It should never be necessary to cut directly from the trunk of an established willow tree. This would open the tree to potential infection and disease. Always harvest responsibly. 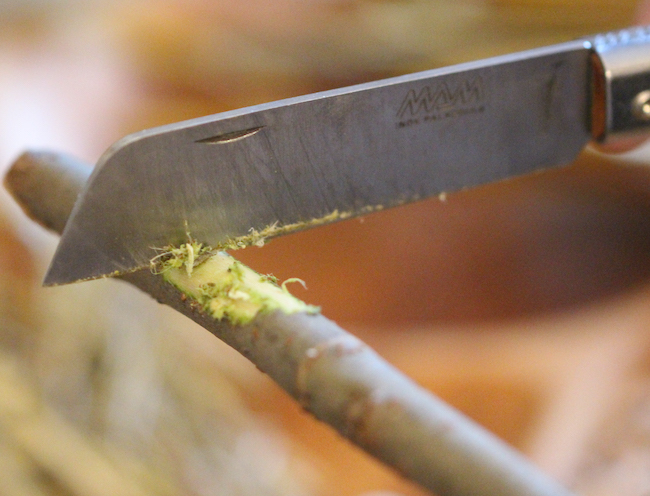 Scraping away exterior bark using a pocketknife. I seldom take the time to do this.

If I’m stripping bark from a young tree with very thin exterior bark, I rarely take the time to scrape away the exterior bark layer. I typically just include that layer with the inner bark fibers. However, if you wish to remove the thin layer of exterior bark, you can do this by simply scraping it away with a knife blade at a 90-degree angle to the branch. 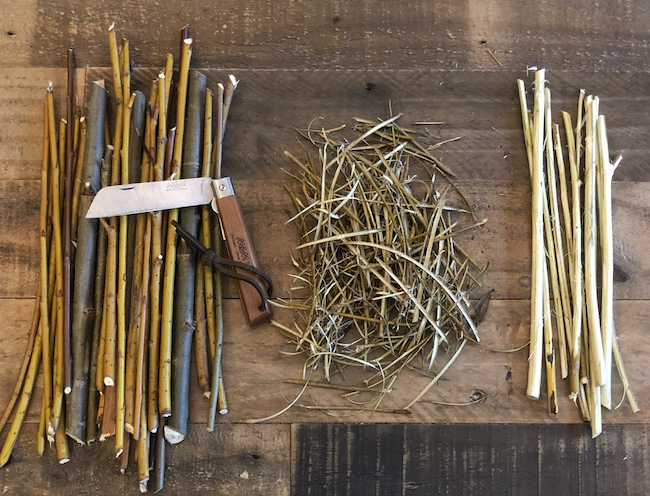 As I’ll discuss next, willow bark can be used fresh or dried. To dry and store your salicin-rich inner bark, cut it into thin strips that are less than 3 inches long. These can be dried in a dehydrator or just on a baking sheet left out on the counter for a few days. Be sure to turn them over each time you walk by to allow all sides to breathe. They should be dry and ready to store in either a paper bag or sealed jar within just a few days. 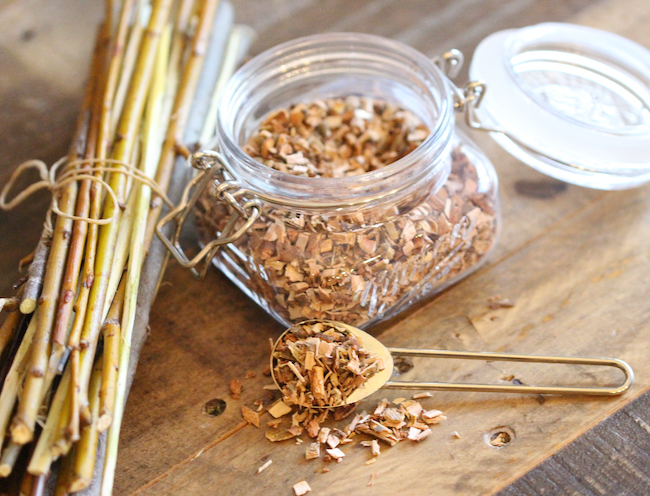 Sometimes I cut the strips of inner bark into little pieces that end up resembling sawdust.

How to Use Willow Bark as Medicine 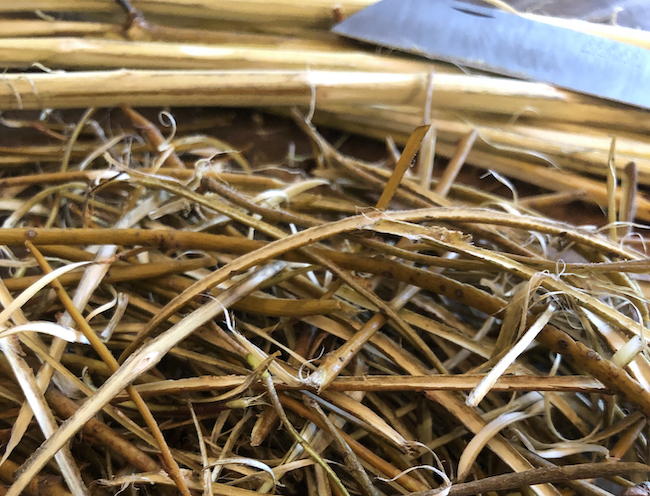 Shavings of willow bark to be dried and used as medicine.

Unlike the willow bark that can be purchased at natural food/medicine stores that offers a standardized measure of salicin, when you make and ingest your own medicinal willow bark, it’s impossible to know the exact dosage you’re getting. The amount of salicin you get will vary by your method of preparation, how much bark you use, and not only the time of year you harvest the bark, but also the species of tree it comes from and even how much sun or water the tree receives each year. That being said, the amounts and doses I mention below have all worked well for me.

You can use willow bark for medicine in a variety of ways, including tinctures and homemade capsules. However, the two methods I prefer, because of simplicity and time, are willow bark tea and what I call a “willow bark field dose.” 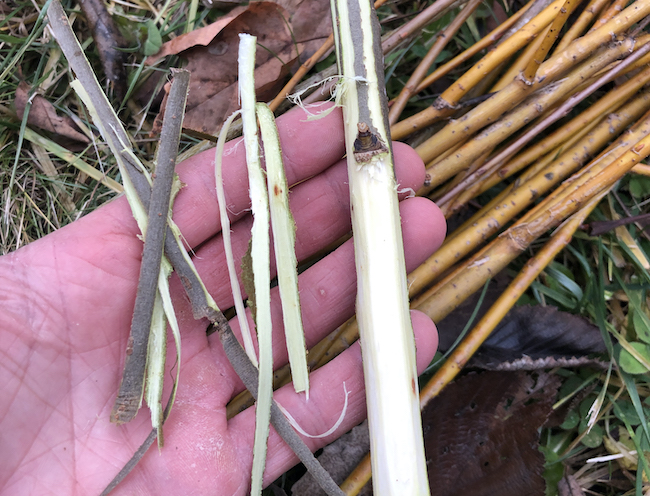 This is the most basic (and quickest) way to reap the salicylic rewards of willow bark, and it’s the same method my grandfather taught me when I was a boy. Simply find a willow, peel off 3-4 small, 2-inch strips of bark from a young branch or shoot, chew the strips, and swallow the juices (but not the bark itself, which should be spit out afterwards). Now, I’m not going to lie — the taste is incredibly bitter (imagine chewing up a few aspirin), but it’s simple and effective. By chewing the bark, you’re releasing and mixing the medicinal salicin and flavonoids with your saliva. After swallowing, you’ll feel the benefits after 30 minutes or so. Although the flavor is extremely bitter, there is something equally satisfying about knowing you’re harvesting medicine with your own hands, teeth, and spit. I repeat this a couple times a day when necessary. 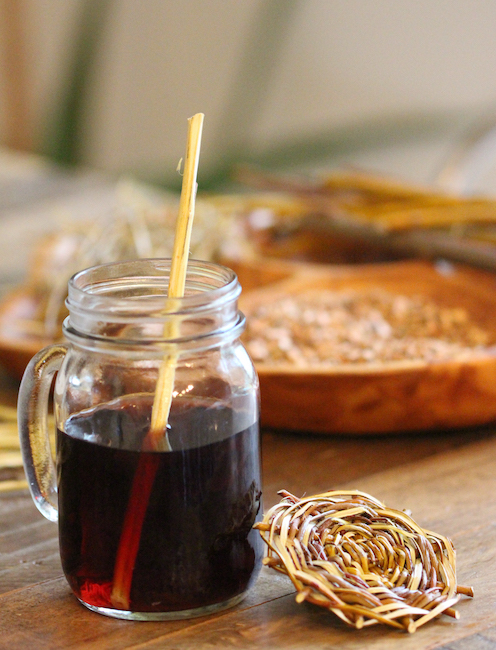 A freshly brewed cup of willow bark tea. I made the coaster using scrap pieces of willow while the tea was simmering. Willow is a fantastic basketry and weaving material.

Making a tea with your willow bark is another very simple and quick way to get some pain relief (and it’s a lot more palatable than the “field dose”!). 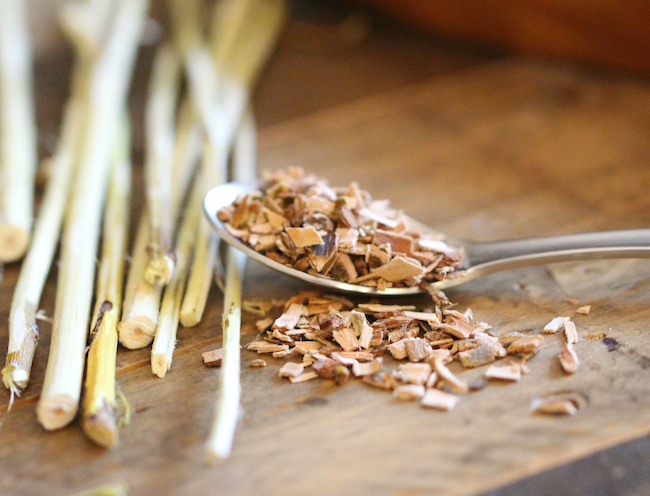 Use 1-2 teaspoons of willow bark to make 1 cup of medicinal tea.

I use about 1 to 2 teaspoons of dry willow bark per 16 ounces of water (makes about 8-10 ounces of tea after boiling and simmering). 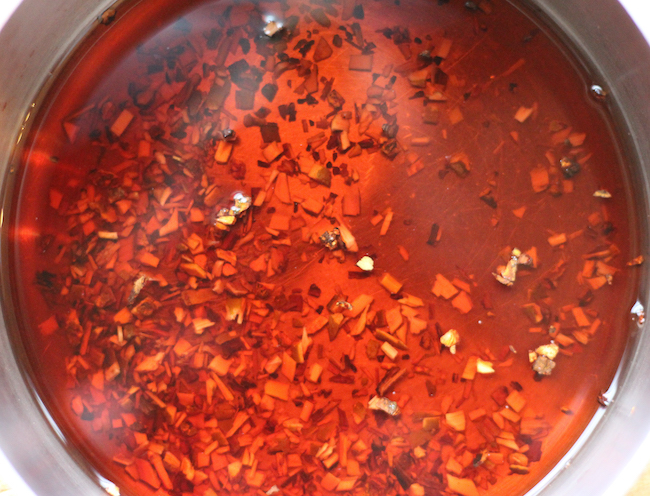 I boil the bark in the water for 5 minutes and then let it simmer another 10 minutes. 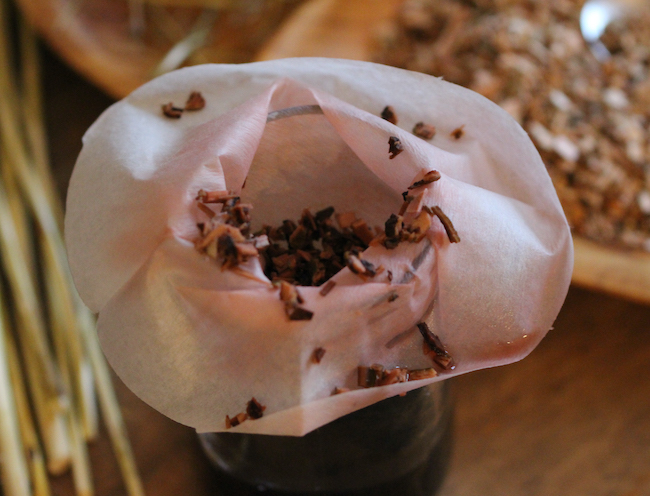 Straining tea through a coffee filter helps to remove bark particles before drinking.

Finally, I strain the tea through a coffee filter to remove the bark particles. I typically use white willow, and it brews to a beautiful reddish color. I suspect this has much to do with the tannins in the bark. When I’m sick or sore, I’ll drink 2 cups of this tea per day and it’s a great relief.

Unlike chewing on raw willow bark, the tea is not bitter at all. It has a woody, medicinal flavor and always numbs my mouth a bit. Any bitterness that pushes through is bitter in a good way. Besides, most people need to work on their appreciation for bitter flavors, anyway. That said, I do only drink willow bark tea when I need the medicine. It is not a tea I would drink for pleasure. 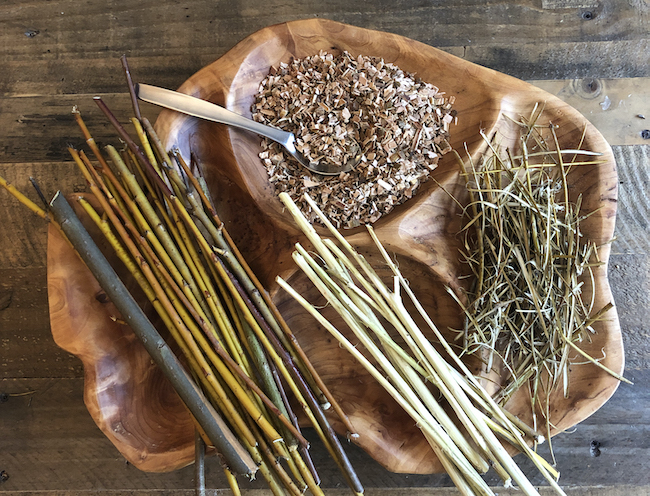 Willow bark is essentially the precursor to one of the largest and most commonly used categories of pain relief drugs on the planet: Nonsteroidal Anti-Inflammatory Drugs (NSAIDs for short). I’m pretty sure my grandpa had never heard the acronym NSAIDs, nor did he care. He just knew that if he chewed on willow bark like his own grandpa taught him, that his headache and arthritic pain went away. This is the same reason why I chew on willow bark today — because it works.

Remember, it’s not IF but WHEN.

This discussion of willow bark for medicine is for educational purposes only. This information has not been evaluated by the Food and Drug Administration. This information is not intended to diagnose, treat, cure, or prevent any disease.

Creek Stewart is a Wilderness Survival Instructor, author, and television host. To learn more about Creek, or to take classes, visit www.creekstewart.com.

The post How to Harvest and Use Nature’s Aspirin appeared first on The Art of Manliness.