Announcing a New AoM Original E-book: The 33 Marks of Maturity 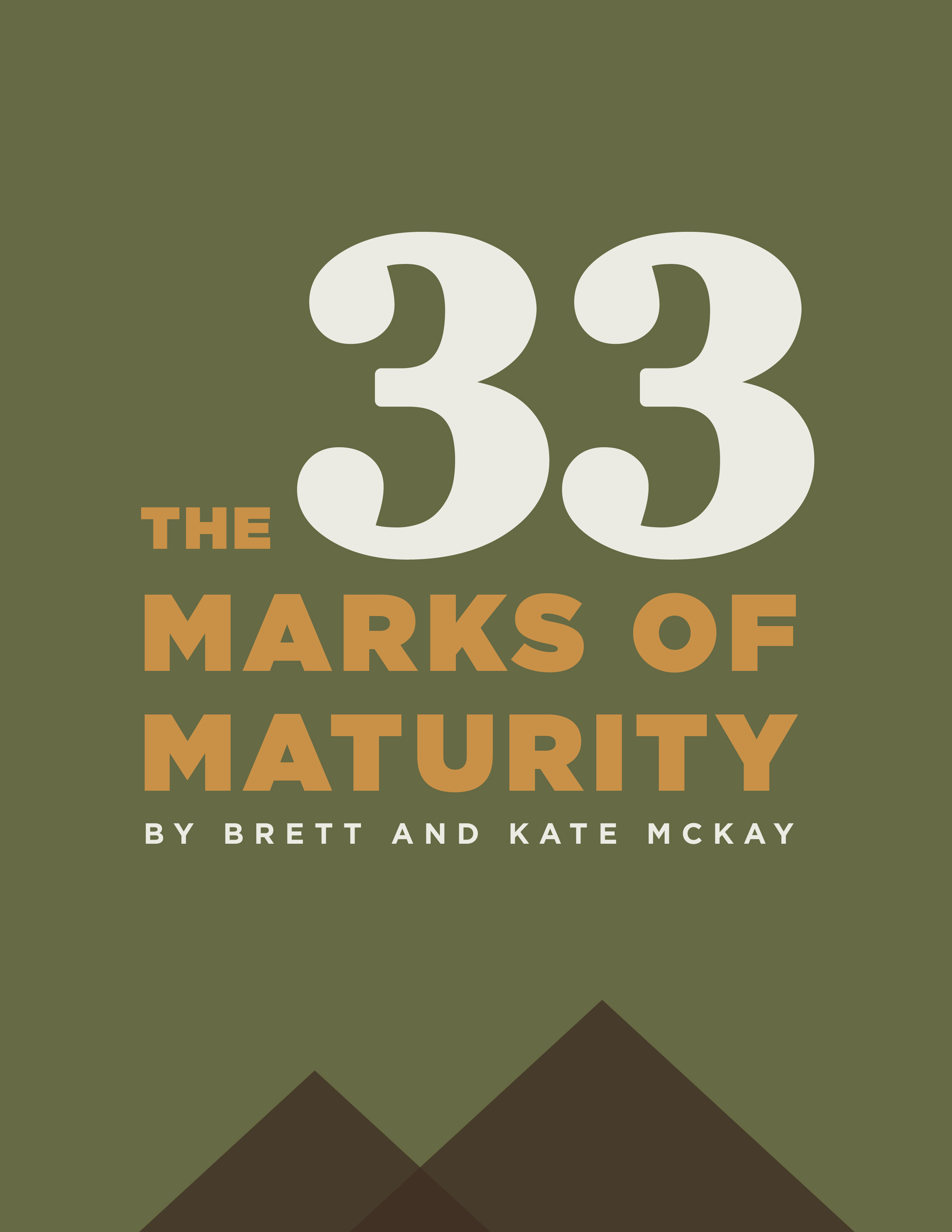 When I explain the Art of Manliness to other people, I often describe it as a site about growing up well, aimed at men. Its mission grows out of an awareness that this process of growing up isn’t an easy task. Part of what makes it difficult, is that maturity is rarely defined, so that you don’t know what you’re aiming for and how much progress you’re making towards that horizon.

To that end, today we’re releasing a new original ebook which seeks to transcend one-dimensional pictures of what it means to be an adult, in order to show the multi-faceted constellation of traits, behaviors, actions, and mindsets that form its reality. In this short ebook, we illuminate the 33 characteristics that make up this constellation of maturity. Each quality is given a succinct summary that serves as both description and reflection, so that you understand what it is, and how you may better grow towards it, and into a thriving adult.

While growing up is hard to do, it is essential for both societal strength and individual fulfillment. Do you want to stay on that lesser, immature plane? Or would you rather take the road less traveled and mature into a man who utilizes his full potential and has a real impact on the world?

Take the rarer, more adventurous path by learning The 33 Marks of Maturity.

The contents of this new book aren’t available anywhere on artofmanliness.com. The only way to access it is through purchasing on Amazon (in Kindle format) or from our store (in PDF format) for $4.99.

For a preview, enjoy this free excerpt:

Introduction to The 33 Marks of Maturity

It will mean much to our confused and hostility ridden world if and when the conviction begins to dawn that the people we call ‘bad’ are people we should call immature. This conviction would bring us to the realization of what needs to be done if our world is to be rescued from its many defeats. The chief job of our culture is, then, to help all people to grow up. —The Mature Mind by H. A. Overstreet

“So far in the history of the world,” said the war veteran and psychiatrist G.B. Chisholm, “there have never been enough mature people in the right places.”

Though the history of the world has marched decades on since the mid-20th century when Chisholm made this observation, it remains as true now, as it was then.

So strong is the gravitational pull to remain childlike — to stay comfortably ensconced in dependence instead of fighting for independence; to drift in irresponsibility rather than embracing responsibility — that many individuals, no matter the historical age, or their chronological age, never escape this force. They grow into adulthood, but not into maturity.

Yet much is staked on the process of maturation, both collectively and individually.

In The Mature Mind (1949), psychologist Harry Allen Overstreet argued that “the most dangerous members of our society are those grownups whose powers of influence are adult but whose motives and responses are infantile.” Such individuals have stumbled into roles in which their decisions impact wide swaths of people, and yet lack the psychological resources and steady character to make those choices soundly.

Even if not always existentially fraught, immaturity of mind makes for poor teachers, unethical businessmen, impetuous police officers, ineffective politicians, and brain-explodingly bad customer service reps — a reality easily observed today, where so many domains in life resemble a circus staffed by clowns. Yet, ironically enough, those who roundly lament the state of society are often the same people who seem rather childlike in their own orientation; they want to remain a little immature themselves, while being led, protected, served, and tended to by mature adults. They wish to remain children, in a world of grown-ups.

As the story of the Little Red Hen taught us, you cannot eat the bread, unless you’re willing to help make the bread. It takes everyone committing to developing a mature mind in order to create a culture that is safe, healthy, sane, and fulfilling.

Individually, while the easy path of remaining childlike may seem desirable, the more challenging journey to personal maturity ultimately carries the greatest rewards. An immature approach to life may seem to promise the most freedom, but it invariably restricts our autonomy, as we end up the slaves of our emotions, circumstances, and minds, rather than their masters. Ignorance may sometimes appear to be bliss, but incompetence invariably constricts our choices, closing the number of pathways open to us. Undirected groping may sometimes feel like liberation, but a lack of progress towards an aim ultimately ends in stifling stagnation. Humans are meant to be on a trajectory of continuous, upward growth, and it is thus our destiny, and our joy, to grow to full “stature” in every aspect of who we are.

So, maturation is essential for societal and personal betterment, but what does it mean to be mature, anyway?

Maturity is difficult to define, though we instinctively recognize it when we encounter it embodied in another. It is best understood as a constellation of many traits, behaviors, actions, and mindsets which move an individual from the inward-focused egocentricity of childhood to the outward-directed stance of adulthood — from dependence to independence, incompetence to efficacy, bewilderment to wisdom.

In this book, we draw on insights from Overstreet’s The Mature Mind, the follow-up he wrote with his wife Bonaro, The Mind Alive (1954), and many other sources of second and firsthand experience and observation, to list and describe the 33 marks of maturity that together compose this way of being in the world.

Buy the whole book to learn the 33 traits that will set you apart in an immature world:

The post Announcing a New AoM Original E-book: The 33 Marks of Maturity appeared first on The Art of Manliness.